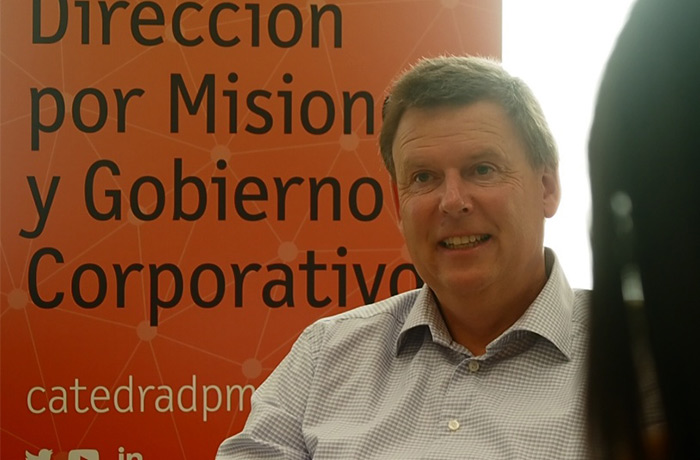 In the latest session of “Desayunos Cátedra” at UIC Barcelona, Wolfgang Doering, CEO of ELIX Polymers, talked about the difficulties of coping with cultural change for mature organisations with over 40 years of industry experience.

The topic of the conference was “Cultural change through Management by Missions: the difficulties of transforming mature organisations based on the example of ELIX Polymers”.

The speaker explained that ELIX Polymers, a company based in Tarragona, places great importance on the development of the organisation and the personal and professional growth of its workers. According to Wolfang Doering, these two aspects, which should always go hand in hand, require firm commitment and a great deal of effort.

Wolfgang explained that, while cultural change affects everyone in the organisation, the Management by Missions model ensures that the interests of the company and workers remain aligned.

According to the speaker, what matters most is that “everyone understands the why” behind what they are doing, making the hours of work they put in meaningful. In particular, this aspect “increases their level of motivation and allows them to give it their all”.

Thanks to the Management by Missions model, they have been able to detect a wide range of needs –both within the company and among its employees–, which they have addressed through workshops and dynamics involving the entire organisation. The speaker reminded attendees that commitment is the key to success in any business and that this requires effort, perseverance and understanding.

ELIX Polymers is one of the main manufacturers and distributors of ABS and supplier of resins and derivatives in Europe, North and South America, Africa and Asia.

“Desayuno Cátedra” is an activity organised by the Chair for Management by Missions and Corporate Government at UIC Barcelona that takes place regularly throughout the academic year.